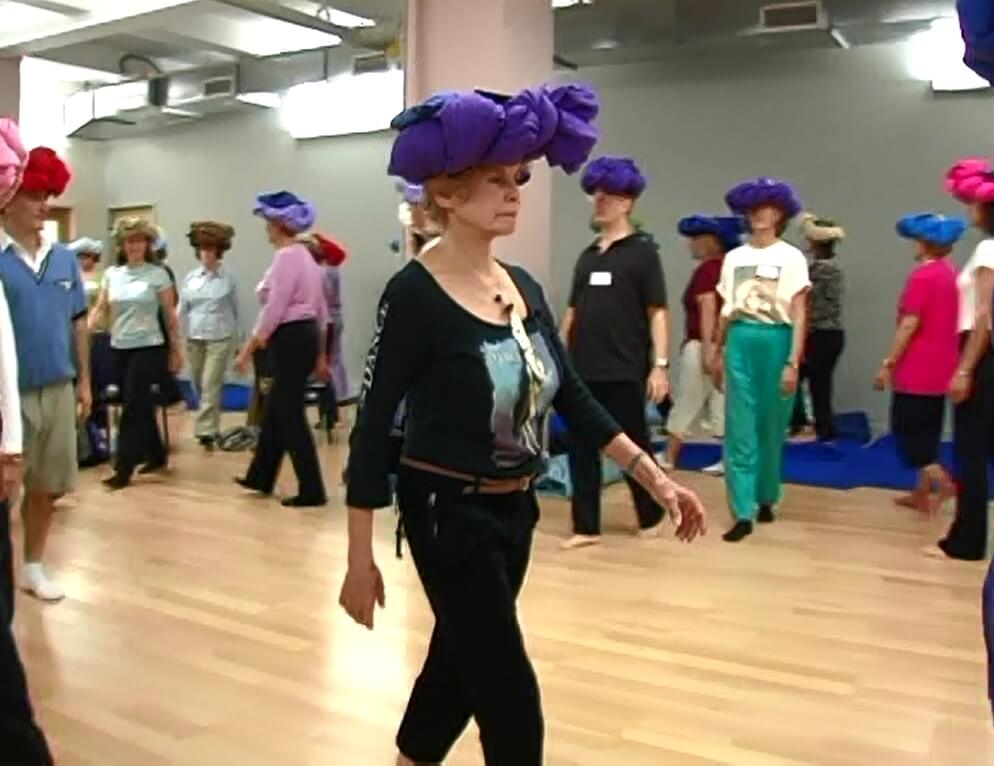 The Foundation of Movement Intelligence was incorporated in
Jerusalem, Israel in May 2008.
FMI Israel is a nonprofit organization established by Dr. Ruthy Alon, the
creator of an uniquely elegant and educational somatic approach to
movement. “Movement nature meant “ practical guide of how to
free yourself from compromised ways of moving by restoring organic,
optimal efficiency, and inner self correction.
This approach includes five interwoven programs each with a different
focus but all offering gentle, progressive, self-reliant and self- help
strategies for sustainable living. The programs BFL, Walk for Life, Chairs,
Mindful eating, and Solutions.
We are dedicated to promoting Dr. Ruthy Alon’s work and vision
through educational programs, classes and training to the general
public, as this was Ruthy’s request.
We aspire to encourage certification of future generations of teachers
and trainers, so we may offer to all “ The end result is that people rid
themselves of their limitations, move more gracefully and most
excitedly – they once again love to move. We call this restoration
Biological Optimism”
(Credit: FMI USA )
Ruthy Alon, PhD 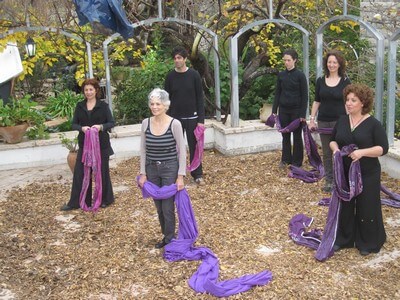 Ruthy Alon, as she says, was fortunate to be at the right time, in the right place and with the right teacher, that determined the call of her life.
She started to attend Dr. Feldenkrais public weekly classes on 1959
in Tel Aviv, which he later called “Awareness Through Movement”®,
when she was not yet thirty and a mother of two.

Those were the years that Dr. Feldenkrais was well known in Israel as the personal trainer of the Prime Minister Ben-Gurion, who strongly advocated this method for empowering efficiency of “every young person”. (For the Prime minister written Doc click here*)

When later in 1967 Feldenkrais decided to train practitioners in his method of hands-on individual teaching, called Functional Integration®, Ruthy, who has been devotedly teaching the group movement processes, was among the thirteen fortunate chosen ones to sit on straw stools around the low treatment table of the master in that first training.

Since those early days in Israel, the Feldenkrais Method® has become the central axis of Ruthy’s development and professional contributions. She was the first practitioner to follow Moshe to the U.S. in 1972, coming to the Esalen Institute in California and then teaching his new approach to the humanistic oriented community in other centers and Universities.

At that time of the Seventieth, many people were searching for ways to take on responsibility of their own personal ecology, and they found a congruent message in the legacy of Moshe Feldenkrais. After Moshe passed away Ruthy conducted the first four-year professional Feldenkrais training in San Diego, as well as in Tel Aviv, Sydney, Florence Italy, as well as teaching as a guest trainer around the world.

“It is not just a method of body movement,” says Ruthy, “but rather an awakening bodily resourcefulness and creativity.” Ruthy created Audiotapes of the Free Your Back, as well as Grammar of Spontaneity workshops of guiding movement processes for the general public, which made a difference for many people. Her videotape of her own movement presentation entitled Movement Nature Meant have been widely distributed throughout the Feldenkrais community*, and as they say one glance is worth of 100 words.

On 1970 Ruthy has published the insights of her teaching in her book Mindful Spontaneity *, soon to be republished by Amazon. Her book has been translated into 7 languages and was awarded the book-of-the-year prize for natural healing, by the Jungian Society in Italy.

Her ongoing quest to promote and restore well being in people’s lives has led her to create her life work in the Bones For Life program for stimulating bone strength, using impactful movement and weight-bearing posture. In the Bones program, she applies the somatic learning principles of the Feldenkrais

Method in the different context of dynamic mobility, in the reality of vertical posture, power management and rhythm, as required for engaging bone function. The Bones for Life program has been taught in over 30 countries

.
In 2004 Ruthy has presented her 30 page paper to NASA, Texas: Conditioning Bone strength on Weight Bearing Posture, ( click Here ) as well as her Abstract + Poster (Click Here) at the NASA conference , Kansas, May 2005, Aviation, Space and Environmental Medicine Journal, March 2005, Vol 76 No. 3 Abstract #72.

Being tuned to what is the crucial need of people at the time, Ruthy keeps creating a few more programs, all under the umbrella of Movement Intelligence, for the awakening of the core resourcefulness, the inner compass for navigating gratified way of functioning.
Her programs:
Bones for Life: for bone strength and weight bearing posture
Walk for Life: For Health, Power management & Biological Optimism
Chairs: From fixation to mobility
Mindful Eating: The Inner Game of Chewing
Movement Intelligence Solutions for Individual Problems : Self-care Strategies.
All programs intend to provide people with the perception and the practical guidance of how to free themselves of compromised level of moving, by restoring the organic native sense for self-correction.

One of the special qualities that Ruthy brings to her teaching is her capacity to decipher complex combinations of movement management and to design solutions for how to improve them. She offers clear verbal explanations that empower her students to comprehend and master the work on their own, with a sense of personal success.

Ruthy balances the influence of the intuitive harmony right brain, acquired from her mother, who was of Jewish Moroccan origin, with the left brain conceptual thinking from her Russian-born father. She was born in Colombia, South America, and grew up in Israel. She spent a few teenage years at school in a kibbutz, which imprinted in her an idealistic approach toward progress and society. She is a graduate of a teachers’ college in Jerusalem. Recently, at the age of 83, with quite extensive schedule of teaching worldwide, Ruthy did her Ph.D. on Movement intelligence. (Click here*)

Ruthy has a family with 5 grandchildren and 1 great granddaughter. Her home, where she lives with Dan de-Medina, a brain scientist, is in Jerusalem. In her mature years, she is a living model of what she is teaching, as demonstrated by her youthful, flowing way of moving, which she says is getting better every year! 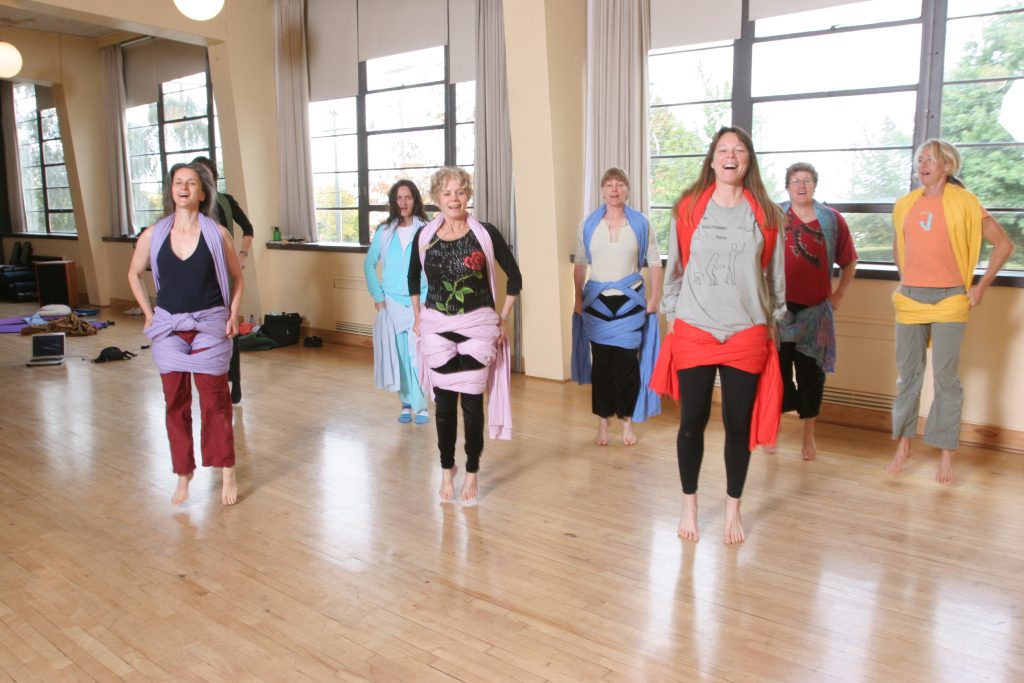 Movement Intelligence is a series of programs developed by Ruthy Alon, an early student of the Feldenkrais Method® with Moshe Feldenkrais himself. It takes the concept behind her Feldenkrais training and dives deeper into the idea of moving your body as nature designed it to move.

In Movement Intelligence classes, the focus is on fine-tuning the way you move into one which builds wear and repair instead of wear and tear. Expect your movements to be broken down to the subtlest of efforts while you’re learning about the way your body was designed to function. Using sensory motor feedback, you’ll pull together your movements and naturally organize in a way that is incredibly efficient, pleasurable, and sustainable. In short, by studying your movements you can modify and redefine them to work better for you with less pain, more flexibility, more strength, and with movement confidence.

We envision a world where, through optimal posture and movement, people from all facets of life enjoy natural balance and coordination, and autonomously foster flexible and reliable bones throughout their lives.